initially, i was approached and offered the opportunity to exhibit based on some previous work (i will post images if it is of interest to my readers). knowing the space, i was determined to do something new with my work and to try to take advantage of the lo-fi/ industrial mood of the space. also, i knew i had a lot of freedom and could use the space (and fill it or not) however i wished.

i had wanted to turn some books into lightboxes for quite some time (i have 4 or 5 boxes of condensed Reader's Digests, thanks to the local Catholic Church), but had no idea how to go about constructing them. that was the primary challenge since i was absolutely ignorant about the electrical logistics of the planned (hoped for?) piece, and the metaphors of books and light were core to the work. without the lightbox/books, i would have made an entirely different exhibition (though not really - it would still involve the idea of books and explore many of the same ideas). and now i can explore those ideas for other spaces.

in my sketchbooks i collect random [para]phrases and quotes, and recipes for kneeling was one that had been resonating for some time. that phrase became the generating impulse for the exhibition. i knew that i would use books, and i knew that i wanted to use light (and therefore darkness). i knew that i wanted to incorporate an interactive and physical (ritual?) element. the main issue was: how do i build them? the second issue was: what kinds of images do i want to employ (if any)? of course, there were other questions: what media? do i use collage? drawing? painting? should i use text? what size? how many? what arrangement?

to be honest, i tried revisiting previous abandoned images and pieces, but nothing seemed to really suit the piece. while i do tend to work more conceptually (.e. i have an idea and i work towards that idea, considering how the materials 'work' or 'speak', as well as what kinds of images or texts that i want to use) there is also an intuitive component to developing the work and the images/ texts, and the connections between those elements. the first image that seemed to work for the piece was a combination of the following 2 images (which did get used for the piece, albeit in slightly altered form): 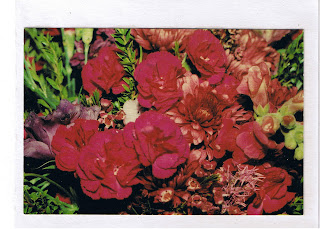 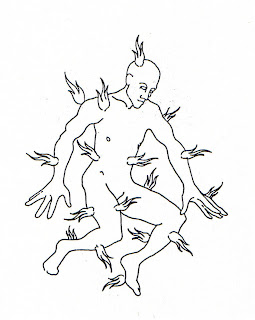 these images started generating other related images, and that started the process. in addition, i researched the meaning and history of these two words, and solicited responses from friends, acquaintances and strangers through various forums i haunt. they ended up providing me with an interesting list of options and responses, both specific and general, which also generated images.
Posted by techne at 11:42 AM No comments:

here are some images of the installation and space: 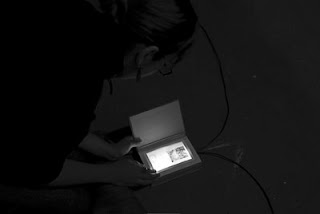 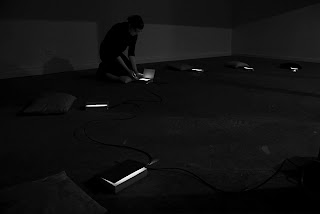 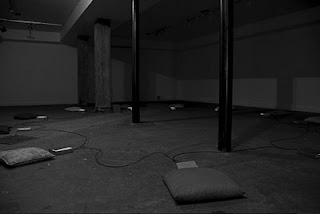