new exhibition: i'm not finished yet

i hope you will be able to come to the naess gallery this saturday to see my new exhibition:
i'm not finished yet. 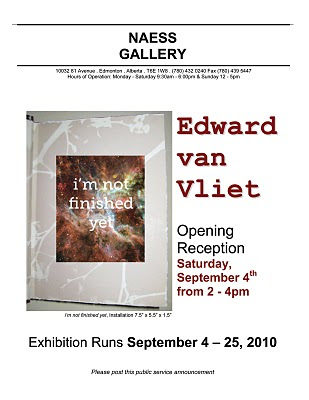 there will be 12 new lightbooks. they are quite beautiful. sublime, even.
Posted by techne at 10:05 PM No comments:

in addition to being part of various cultural traditions, we are also engaged in any number of artistic traditions. or at least at some point we need to recognize which artistic tradition(s) we are engaging with as we create our work. that means deciding whether we want to work within it, or against it (or perhaps, more usefully, somewhere in between).

The following morning, I returned to the Accademia and stood for more than a hour drawing the David. I drew the head, with the eyes that reflected the decision to enter the arena of power; I drew the huge veined hands that would soon kill; I drew the shouldered sling being lifted in preparation for the delivery of death. The little man with the broken nose had created this sculpture in an act of awesome rebellion against his tradition and his teacher. Other Davids I had seen were small in size and represented David after the battle. This David was a giant and represented the decision to enter the battle. The little Italian had effected a spatial and temporal shift that had changed the course of art. (p.297)

i understand tradition as being an ongoing process - we are [hopefully] part of living traditions. traditions are constantly being transformed and reinvented for new contexts and new participants, though the essentials remain the same. tradition is about how we acknowledge, celebrate, participate. i don't subscribe to the modernist idea that the artist must always subvert or overthrow (or even re-invent) traditions in order to be an artist. the relationship between artist and tradition need not be antagonistic.

tied to this attitude is the idea (and pressure) that the artist must always create something new i.e. be "original". this is a pretty specious idea anyway, but if we applied this idea as a touchstone of what it means to be an artist, many of the great historic artists couldn't be considered terribly "original" as they worked in specific traditions, adding small shifts and introducing new elements in their work. even then, those changes were as often generated by cultural/ philosophical shifts as by any novel invention by the artists themselves. we talk about originality as if it is possible to make radical breaks with tradition, but in fact, originality is always determined by its relationship to established [cultural] traditions.

anyway, i think it is when we discuss where we are within our own artistic tradition(s) that we use that rarefied arts language. but even then we must be aware of what we are really saying when we position ourselves. we need to have spent the time truly exploring and 'unpacking'; analyzing, contextualizing and interrogating those narratives. after all, they aren't neutral. again, the following exchange (found on p. 289/90) opens up some questions around this idea:

"Why do you have to paint and display to the public things that are offensive?"
"They aren't offensive to people who understand art."
“They’re offensive to people like me, Asher. I’m asking you why you have to paint that way.”
“Because I’m an artist”
“Asher, look at me. I’m not a fool. I speak to senators and governors…I have a bachelor’s and a master’s in political science. Explain it to me so I can understand it. Why do you have to paint and display nudes?”
“Because I’m part of a tradition, Papa. Mastery of the art form of the nude is very important to that tradition. Every important artist who ever lived drew or painted the nude.”
“Art is a tradition.”
“Yes.”
“I understand. But why is the nude so important in this tradition?”
“Because it has always been part of that tradition.”
“Who began it?” “The Greeks.” “Ah,” he said.
“The Greeks. Our old friends, the Greeks. All right, Asher. I can understand a little better now why you paint nudes. Why do you display them?”
“I don’t want to sit in a room painting for myself. I want to communicate what I do. And I want critics to know I can do it.”
“Even if it offends people?”
“Everything offends someone.”
“Even if it offends your father?”
I did not respond.
“There is such a thing as respect for your father. That’s also a tradition.”
“I respect you, Papa. But I can’t respect your aesthetic blindness.”
“Aesthetic blindness?…An interesting concept. Aesthetic blindness. And what about moral blindness, Asher?”
“I’m not hurting anybody, Papa.”
“One day you will Asher. This will lead you to the sitra achra.”
“No.”
“Asher, if you had a choice between aesthetic blindness and moral blindness, which would you choose?”
I said nothing.

this passage puts its finger on several questions, but the most important point is our unquestioning acceptance of [the artist's] status quo; the mythology and machinery of what it means to be an artist -- and, perhaps, especially a contemporary/ 'cutting-edge' artist. [self] awareness of oneself as an artist is key to being able to engage with your 'project', your message, content, subject, whatever. this self-awareness is not simply limited to an inwardly focussed appraisal or declaration of our psychological, emotional and/or spiritual existence, but also one's place within the [various] artistic traditions and social contexts one moves, lives and breathes in and amongst. in essence, as an artist, what do you do, and why? and does the way in which you make your work affect its production and reception? because i dothink that matters. a lot.
Posted by techne at 11:29 AM No comments: