once again, my friend larry haas of the idea factory has made a wonderful video capturing my exhibition at profiles: art gallery of st. albert. enjoy.
Your Thoughts Like Stars from Larry Haas on Vimeo.

last week i installed your thoughts, like stars. it was somewhat stressful pulling everything together after my trip to holland (and my two previous exhibitions in september and october), but i managed to get to edmonton tuesday evening and began installing the exhibition on wednesday morning. i know i stressed out the installation team (again, my deepest apologies) but i also knew that my work would be fairly simple to both install and light. and it was. by wednesday afternoon, most of it was installed and ready to be lit.
here are some images of the work in situ: 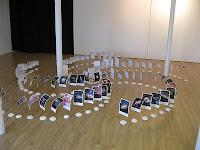 the weight of things 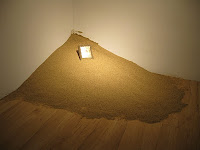 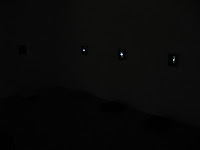 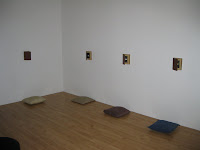 recipes for kneeling (version two) - as installed and lit
***
the opening reception was great. it was wonderful to reconnect with so many people who i had worked with when i was the education curator with the gallery, both artists and co-workers/ volunteers. while there weren't hundreds of people, of those that did come, many stayed for twenty or thirty minutes (and some even longer!). to be honest, i would much rather have 60 people visit and stay and linger and engage with the work than have 200 come and spend 5 or 10 minutes, and that's what happened. there were many people who visited in the front, lit portion of the gallery, but there were also many who sat on the bench in the darkened back half of the gallery, meditating on the work.
there were several people who came up to me that evening to share the impact that the work was having on them. some spoke about how some of the pieces were challenging them on some quite specific [personal] issues and struggles. others shared how they were going through some tough times, and that the work was inspiring hope in them. how wonderful that my work should inspire hope. when was the last time art truly inspired hope in you?
Posted by techne at 7:18 PM 3 comments:

off the wall, the CAAG (canmore artists and artisans guild) + guests group show, is now over. there were a lot of very good pieces by numerous artists, including wood workers, ceramicists, glass blowers and textile artists. my piece felt like the odd one out (though i did borrow a quilt to cover the tent in which my books were placed). 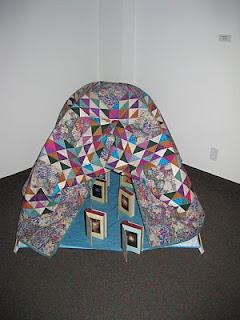 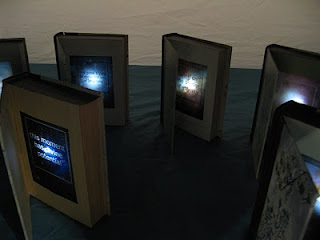 the piece i had submitted was a different installation of whisper, one which required visitors to physically enter the piece's space. on sunday i sat in the space and spoke with visitors. people engaged with many of the pieces, but the comments i heard about mine included "clever", "beautiful", "unique", "fun" and "very profound". at one point, a small boy and his mother entered, and stooped down to look at the pieces. i told them they could handle the books and he went to town...he crawled inside and began rearranging the books, even moving them all out of the tent so that his mother could join him. it was neat to watch. it was a bit of an experiment, placing the books inside something, and one which i will revisit; namely, the idea of inviting people to enter into a 'warm', "safe" place in order to read the books. i know it worked for at least one person. while i was away in st. albert last week setting up for your thoughts, like stars (a solo exhibition), i received the following email:

Edward, your Whispers installation in the Canmore gallery made sheets of tears cascade down my face. You created a profound experience for me. The last time I was so moved by art was a Gustav Klimt exhibit in NYC 4 decades ago. Thank you for creating and sharing something so powerful.

that is pretty humbling. i'm still curious as to what exactly this person was experiencing and responding to, but that is pretty powerful. you want your work to impact people deeply, whether intellectually, emotionally or spiritually (or, hopefully, all three at once). personally, i want my work to change people - to shift them; to bring healing, hope, revelation, transformation. to open them up. is that asking too much?
i think not.
Posted by techne at 8:23 AM 1 comment:

here is the statement for the work in the exhibition. pictures will be posted after the opening. there are three new pieces, and one re-contextualized piece. and so:

My work explores the interaction between images and text, and the [changing] interpretations that occur as one discovers and explores those connections. The connections between the objects soon begin to be about the connections between viewer and object, an ultimately between the viewer and everything they bring to that conversation. As such, the work is insistent that the viewer or reader does some of the heavy lifting of interpretation.

In your thoughts, like stars I wanted to explore the tensions between more mundane, earthly concerns and more ethereal, cosmological themes; and to use light and vision as primary ideas for that exploration. The way in which the viewer engages with the work is part of how it gains meaning, and that interactivity is an important part of the work. The theme of vision and [self] perception – what we see, and how we see it – is a primary idea for the exhibition, as is the symbolic use of light. And sand. And books/ text.

the weight of things: 100 cosmological images (nebulas, stars, galaxies) are combined with texts that are variously entreaties, accusations, questions or demands. I want the viewer to consider their role and responsibility in the context of their lives and, yes, the universe.

recipes for kneeling (version 2): The books, placed at a height that requires a specific posture for engaging with them, promise some sort of story. That posture, in turn, creates a more directed way of interpreting the images and text (not to mention the object itself).

(the space between): A book, sand and light. What more needs be said?

[NAME THIS]: This interactive piece invites the viewer to share a personal and specific memory in response to several colours. The colours – red, green and blue – are the primary printing colours and, in a very real way, shape our vision. Memory too is a type of seeing, though an internal one.

I would like you to pay attention. To make connections. To engage in a conversation.

Images are courtesy of NASA and ESA/Hubble (images are released as per Creative Commons Attribution 3.0 Unported licence). Please note that said use does not connote an endorsement by either NASA or ESA/Hubble.

I would like to thank Darryl Wurst of Bow Valley Basics Canmore, who sponsored some of the weight of things’ printing costs.

Finally, I would like to thank my gracious and wonderful wife, Lisa, and my two always entertaining and curious boys, Aden and Samuel, for their encouragement and love.

Where there is no vision, the people perish. Proverbs 29:18 (King James Version)

hope to see you there! and if not there, commenting here once pictures are posted...

Posted by techne at 3:35 PM No comments: