i've never done this before, but - stirred by a friend's list - i thought i might post my top picks of 2010. please let me know your own top 2010 arts experiences.

my name is asher lev by chaim potok. over the years, people would repeatedly mention this book to me and tell that I “need to read it”. It certainly gripped my imagination, and it moved me emotionally as well as intellectually. its exploration of identity (as artist, and as member of a family, culture, faith community), and responsibility (as a member of the above) challenged me and affirmed me (and i blogged about it here repeatedly between june and october of 2010). some passages stirred hope and life in me, while others were far too familiar a refrain. i didn’t accept it all, but then the book presents numerous voices and positions on art, and the use and abuse of art and its power.
honorable mention(s): book of mercy by leonard cohen. such beautiful old testament lyricism. so raw. so metaphorific. also, a re-read of larry shiner’s the invention of art: a cultural history. a rich, challenging book about the concept and use of art in western culture. a must-read for any artist. and one more -- for the beauty of the church: casting a vision for the arts by david taylor. a well-balanced collections of essays that explores the role of the arts within the church (though not in that 'white cube'), without getting overly theological (though there is theology) or isolationist or 'super-spiritual' (by which i mean it is quite practical as well).
art
barbara kruger at the tijdelijk stedelijk. i’d always wanted to see her work in an installation. i knew what i liked intellectually about her text pieces – the cacophony of voices, the political and social commentary, the propagandist agenda – but i wasn’t prepared for the experience of standing in the space and being both visually and  physically assaulted by the texts. 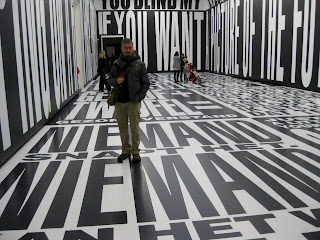 honorable mention(s): either blazzamo by kristi malakoff at latitude 53 – beautiful, precious, obsessive ‘collages’ that truly took my breath away; or storm room by janet cardiff and george miller at the art gallery of alberta. transporting.


film
band of brothers. as a series, it was brutal and absorbing. while the historical aspect was interesting, the real draw for me was the depiction of the relationships between the soldiers in easy company and the psychological, rather than physical, toll of war. the power of those relationships to instill hope, purpose, faith.
honorable mention: inception. while i was gobsmacked the first time around by the effects and the intricacies and the audacity, what i took away from this film was how important a father’s role is in shaping identity (an aspect of the film that i have yet to see anyone discuss). who cares about the dream(s)? (i think it all takes place in cobb’s limbo, anyway). what about the power a father has to shape and either inspire and affirm and bless or crush and embitter a son?
music
mumford & sons. the rise and fall and repeatedly glorious codas of their songs are transcendent (yeah, i said it). the lyrics are rich: love - it will not betray you/ dismay or enslave you, it will set you free/ be more like the man you were made to be, and I found myself hooting and hollering along repeatedly, exuberant and deeply moved.
honorable mention(s): every jesus culture CD i own (and that would be 4) was purchased this year. a breath of fresh air, ‘worship’ music with musicianship and a prophetic declarative edge. many others were listened to, but these had much of my eartime. other faves this year include janelle monae’s the arch android, with its audacious and far-ranging operatic scope, and not without generous helpings of funk and soul. janelle's performance on letterman was astounding.
late in the year sufjan stevens’ all delighted people EP and the age of adz loomed large on my various musical listening devices. while there is definitely some growth and exploration (i'm enjoying the tinge of electronica and the wider range of singing), i’m finding myself less often connected to the music/ songs. i find that my enjoyment is sometimes an intellectual or conceptual one as he riffs on a theme or sequence (not unlike much classical music). but i’m not so often moved by it…in any case, my plan is to keep his stuff on heavy rotation for awhile.

dance
dark matters by kid pivot. this theatre/dance mash-up utilized puppetry, projections, martial arts, humour (slapstick), theatre and, of course, contemporary dance. it was about the things we don't wish to discuss - the things we would like to keep hidden, the things that haunt us – and how these “dark matters” affect our movement and interaction. it was also a piece about the creative process as much as anything else, and about the relationship and tension between creation and destruction. an astounding production.


honorable mention(s): every version of so you think you can dance, whether united states, canada, holland…unlike all the other instant fame reality TV competitions, SYTYCD’s final 18 or 20 or 22 participants can all dance - they are skilled, passionate and dedicated artists, and there are a lot of talented choreographers whose creative visions have resulted in some truly moving pieces. every episode i watch there is a performance i marvel at. it makes me wish i had pursued dance, or choreography.
i must also mention 2 other things. at the risk of blowing my own horn, the we are artists workshop i presented with iloveartists, and my 3 exhibitions this fall/winter were hugely impactful for me personally.
we are artists was a workshop i presented around the identity and calling of the artist. it was an honor to be asked to do it, and i hope to do more in the future. not only was it great to be able to affirm and challenge fellow [christian] creatives, it was also a great learning experience for me (and affirmed me in my calling).
i’m not finished yet, off the wall, and your thoughts, like stars were a challenge to pull off as i had determined that i would try to make new work for each exhibition (which i mostly succeeded in). there were a number of experiments, and i need to rethink some of the pieces, but on the whole i was humbled by the ways in which people responded to my work. it was gratifying to know that the spirit could use my pieces to speak to some pretty deep things, and that people responded on many different levels: intellectually, emotionally and spiritually. i feel like i am able to keep moving forward, and i trust some of my planned pieces more (or rather, trust that God is somehow involved with them).
here's to 2011!
Posted by techne at 10:30 AM 2 comments: